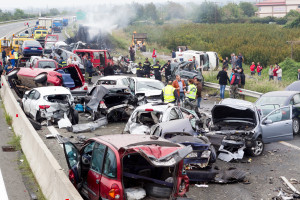 1. I can resolve the accident with the other driver’s insurance company on my own. Keep in mind that the insurance representatives (adjusters) are professionals who have been trained to obtain evidence that can be used against you. Generally, the insurance carriers will immediately contact you to acquire a recorded statement as to what happened. You are under no obligation to comply with such a demand. You are dealing with the entity that is not there to act in your interest. You may not fully comprehend the process, the value of your claim, the rights you possess under the law.

2. I appear to be uninjured, thus I will just work out the issues myself. Oftentimes, a person’s injuries may not appear until sometime later. If you feel okay now or immediately after the accident, and you assume the task of handling the matter yourself with the other driver’s insurance company and sign a release, you face the barring of your claim in the future if the injuries show up some months later.

3. My insurance company will take care of everything for me. It is a mistake to believe that your own insurance company will resolve all issues for you as the accident is not your fault. Regardless of whose fault it was, you would be obligated to pay the deductible for damages to your vehicle. The other driver’s insurance carrier may dispute the liability even if you truly conclude that it was the fault of the other driver. If you suffer personal injuries, your own insurance carrier will not pursue that part of the claim on your behalf. This will require a separate action.

4. The police have determined who was at fault. Ordinarily and if the police were contacted concerning the accident, an incident report would be composed. Frequently, the incident report would state the officer’s opinion and conclusion, based upon the statements of the witnesses and the observation made at the scene of the incident. However, the conclusion of the police office does not always or necessarily reflect the accuracy of the events. In a court action, the witnesses (including the peace officer) will be examined to get at the truth. Thus, the police report acts only as a possible piece of evidence.