Skip to content
The Law Office of Roland Ho > News & Blogs > Family of woman dropped on head by ambulance crew gets $1.5M 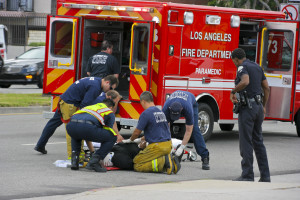 WOBURN, Mass. (AP) A Massachusetts jury has awarded $1.5 million to the family of a woman who died days after an ambulance crew dropped her on her head. The Middlesex Superior Court jury ruled Monday in favor of the family of 67-year-old Barbara Grimes in its lawsuit against American Medical Response.

The family said in the wrongful death suit that Grimes was being transported in January 2009 after receiving dialysis in Plymouth when a pair of emergency medical technicians rolling her into an ambulance tipped over her stretcher, causing Grimes to fall and hit her head on the ground. She suffered a brain hemorrhage and died five days later. The family’s lawyer called her death “unnecessary” and “‘easily preventable.” AMR said the stretcher malfunctioned. A company spokesman didn’t immediately return a call Tuesday.

46 thoughts on “Family of woman dropped on head by ambulance crew gets $1.5M”